If you are a speech language pathologist working with children who have articulation disorders or phonological disorders, chances are you’re always on the lookout for engaging fronting speech therapy activities! Keep reading, because this article provides suggestions for velar fronting and palatal fronting activities, as well as some tips and tricks to try out during speech therapy sessions while working on communication skills.

Fronting is a phonological process, which falls under the umbrella of a speech sound disorder (reference: american speech-language-hearing association). Phonological errors involve patterns of rule-based errors, versus a single sound error. Fronting is an error pattern that SLPs may encounter often, especially if working with preschoolers and kindergarteners. A child’s speech intelligibility can be impacted when a phonological disorder is present.

Speech Language Pathologists are trained to diagnose a communication disorder, and this includes phonological disorders. SLPs may administer informal or standardized assessments. Test results may provide detailed information about which phonological processes are considered “active”. These assessments can be helpful in determining a treatment approach and plan.

Palatal fronting occurs when a sound made in the back (a palatal sound, ‘sh’) occurs in the front (an alveolar sound, like ‘s’). The tongue should be touching the roof of the mouth, or the palatal area, to make the “sh” sound, but instead touches near the alveolar ridge. Examples might include saying “so” for “show” or “fis” for “fish”.

When Should Fronting Be Eliminated?

Fronting may be considered age-appropriate in very young children, but it is typically eliminated by 4 years of age.

How To Treat a Phonological Disorder

There are evidence-based intervention strategies that SLPs can use to treat phonological disorders.

Need a great place to start in order to learn how to treat phonological disorders?

I absolutely love this article from The Informed SLP. It reviews the many different treatment approaches that SLPs can take when correcting phonological disorders, and also provides a handy downloadable chart as well. It breaks everything down into manageable pieces of information.

SLPs may find this article on the complexity approach beneficial. The complexity approach may be combined with maximal oppositions, which are pairs of words that differ by multiple elements. Targets may include more complex, later-developing sounds or clusters. This approach can be helpful if a student is demonstrating a moderate to severe phonological disorder.

The Cycles Approach for Phonology

Additionally, this CEU course is a “how to” guide for using the cycles approach by Barbara Hodson. I have had a lot of success using this intervention strategy in speech therapy, and found this course really informative. Phonological processes are targeted in a “cycle”, meaning the focus may be on one specific process (such as fronting), for weeks. Auditory bombardment is used. The SLP would read a list of words to the student with the target sound, or pattern, for that session. When implementing the cycles approach, the SLP would choose a small set of 3-6 target words to address in therapy. Those targeted words are practiced throughout the session, using play-based activities. The speech pathologist would provide modeling and cues throughout the session, then finish by probing for the next session’s targets.

A Phonological Disorder vs Childhood Apraxia of Speech

Distinguishing between types of speech sound disorders can be challenging, yet this is the first thing an SLP will begin to analyze during and following the completion of an evaluation.

Childhood apraxia of speech is a motor speech disorder that involves difficulty with planning and programming the movement gestures for speech.

Here is a handy list of k words to use in speech therapy. These k sound word lists also include some multisyllabic words, as well as consonant clusters.

How To Use Minimal Pairs in Speech Therapy

Minimal pairs can be a great way to target articulation and phonology errors.

Here are ready-to-go minimal pairs to use with speech therapy students.

When working on new sounds and patterns in speech therapy, it is important to have fun and provide motivating activities for young children!

These minimal pair sheets are perfect for the busy slp who doesn’t have time to create detailed lesson plans. A speech therapist can spend an entire session using these no prep worksheets. Elicit a ton of trials easily! This fun activity can be paired with play dough, a magnetic wand and chips, or a fun game. If there’s no time to laminate, simply place the desired pages in sheet protectors. This will ensure a high number of trials during each therapy session. The picture stimuli provided are clear, and the page is organized.

Each page includes an auditory bombardment list for the target sound. Auditory bombardment simply means providing several opportunities for the child to hear the target pattern for that session. The child would listen to the SLP read the list of words, but they are not to repeat the words after the SLP. In other words, they are to be “bombarded” with auditory examples of this target pattern. Visual cues of speech sound mouths are provided on each page, which assists with correct sound production and auditory discrimination.

Home practice is simple and parent friendly, as instructions are included on each sheet. This makes these minimal pair sheets wonderful for getting home involvement. I always let parents know that even more auditory bombardment at home is incredibly beneficial! Pointing out words around the house, while completing daily activities, or while out on excursions with the target sound or pattern is a great way to draw more attention and awareness to the pattern. For example, if a child is working on the k sound, a parent might over-emphasize words like “call” when they are calling grandma.

This “magical” themed fronting activity is another great way to target k, g, and sh sounds. Different minimal pair targets are included on each page. These fronting activity pages are no prep, and can be paired with daubers, a magnetic wand and chips, or play dough.

Speech-language pathologists will also enjoy using these articulation cards for phonology or articulation errors. In addition to showing a picture of the word, these cards also include a visual cue of the mouth. A lot of time, this can be a great reminder for articulatory positioning during speech sound production. The target words chosen primarily use simple syllable structures, which makes this a great resource for children who are just learning how to produce k, g, or sh sounds. Short phrases can be modeled if desired by the speech pathologist.

For younger students working on k, g, or sh speech sounds, play-based activities are beneficial. Hiding cards in sensory bins can a hands-on activity, or putting picture cards with target words into a “feed the monster” or “feed the crocodile” activity, can be engaging for younger students. Articulation mini objects may be purchased as well and placed in sensory bins.

Additionally, using words with simple syllable structures during play while following the child’s lead can be a great way to elicit trials. For example, one might practice words like “eek!”, “yuck!”, “ick!” or “look!” during any play-based activity.

Correct Production of K and G

The k sound is a voiceless, lingua-velar “stop” sound. The g sound is a voiced, lingua-velar sound. The front of the tongue (the tongue tip) is placed behind the front lower teeth. The back of the tongue is lifted, or raised, during k or g production. It makes contact with the soft palate. This forms a seal. Air pressure builds up behind the tongue. When the soft palate seal breaks, we hear an explosion of air as it is released into the oral cavity.

How To Elicit the Velar Sounds (K and G)

Here are some ideas to elicit the k and g sounds in speech therapy for children who are exhibiting stubborn fronting sound errors:

The SH sound is a voiceless, lingua-palatal fricative sound. It is considered to be an obstruent, which means airflow is obstructed.

When producing the SH sound, the lips are slightly puckered. The soft palate is raised. The sides of the tongue touch the palate or upper back teeth (molars), while the tip of the tongue is elevated toward the palate. Airflow is directed through a wide groove in the center of the tongue.

How To Elicit the SH Sound

Here are some ideas to elicit the sh sound in speech therapy for children who are exhibiting stubborn fronting sound errors: 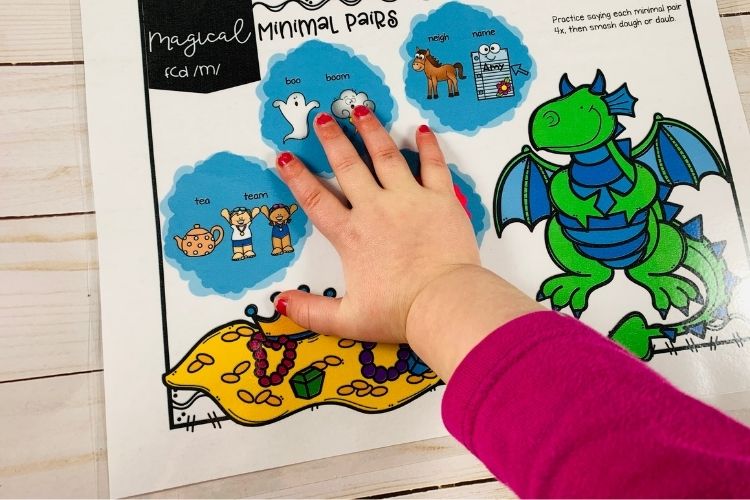 If you are a speech language pathologist working with children who have articulation disorders or phonological disorders, chances are you’re always on the lookout for engaging final consonant deletion speech therapy activities! Keep reading, because this article provides suggestions for final consonant deletion activities, as well as some tips and tricks to try out during…

If you are a speech language pathologist working with children who have articulation disorders or phonological disorders, chances are you’re always on the lookout for engaging stopping speech therapy activities! Keep on reading, because this article provides suggestions for stopping phonology activities, as well as some tips and tricks to try out during speech therapy…